Japanese Humidity: 93% My balls are sweaty 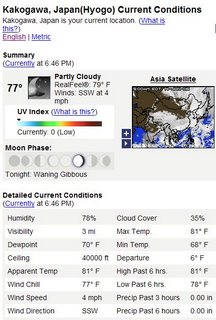 It's roasting here.. the temperature hugged 80 today, which some might say is not too bad. I tend to agree if the humidity were say at 20-30% but when it's reached 93% at 12 noon, and was still climbing, it makes it feel like a popcorn bag fresh out of the microwave. You know when you first rip it open and all that hot steam comes tearing out. That's the way it feels today. And I haven't done anything all day long except straighten up our computer room, and sort through some DVD problems.

I hate the hot and humid weather. In Japan they call it 蒸し暑い, "mushi-atsui".. I call it sweaty balls time. Every inch of your body gets covered in a millimeter of sweaty film that grimes up your whole system. Even with a fan on, it still hot and humid.

So you might be asking why don't you just turn on the central air in your home? I say that concept is only enjoyed in the extremes of Hokkaido.

Just in case you have no clue as to where Hokkaido is, and admittedly, before coming to Japan, I had absolutely no idea as well, I shall provide an image below. 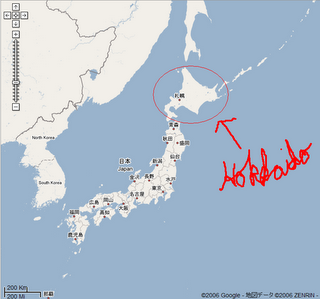 Hokkaido is as close to Siberia as I ever want to get, but as it's as hot as it is now, I probably wouldn't mind streaking buck naked in Siberia. Anything to get away from the heat and humidity of Japan. And it's 7:00pm on Father's day here so you'd think that awful furnace we call a sun would be half way around the world by now, but no, it's still day light out and we have a few more minutes of sunshine left to absorb. God I feel for those people who are out in the elements slaving away at their daily toils all soaking up UVs that surely must be adding to their cancerous savings accounts.

Last week I talked intensively we my co-worker. Let's just call her Mrs. F for the sake of not pointing any fingers or toes at anyone who might be reading. Mrs. F. is a very nice lady who loves to chit chat and chew the fat. Well let's just say she likes to "practice" her English with a foreigner. So in all actuality she doesn't like talking to me because she likes me, oh that would be too honorable I think. Instead I think she sees me as a means to a end, as a way to beef up her Eiken scores and to improve her position at Nova.

What's Eiken? Well, it's a standard test that many Japanese take to measure up their English skills to other like-minded individuals. It's actually called the "Step Eiken" and consists of 7 levels. 1-5 with 2 pre tests at 2 and 1. The pre-tests are there so that the jump from 3 to level 1 doesn't seem so daunting.

More about the Eiken Tests

Now I am all for helping some one prepare for a test in English, after all that's basically my job in essence. However with this co-worker I feel like she's some leech that's sucked on to me like Dracula in some 1950s horror flick. She's always got something to talk about, usually though the conversation drifts into her daughter, her daughters future, or something related to her daughter.

For example, her daughter is only 8 years old but her mother has already planned and plotted out her future. Mrs. F has stated in a very blasé-like way that her daughter will graduate from elementary school, be sent to a private junior high school, finish there, go on to a private high school, attend Tokyo University (a very presitigious Japanese University (some might question if these exist in Japan or not) and then her daughter and herself will move to Canada where her daughter will attend flight attendant school and thus become a flight attendant.

All of this has been pre-decided she tells me. So I ask if her daughter wants to do all that, and without a moments hestitation she tells me "Of course." All the while I am thinking, poor kid... her life has already been chosen for her. What a shitty way to live.

"Above: The Future Mrs. F's Daughter"

And so my conversations continue with this woman. I like her and will continue to think positively of her despite the feeling that I get that I am a free lesson for her.

On an entirely different note, I have been installing Windows Vista recently on a spare computer. Now I know this blog is about Japan, but I think it'd be utterly boring to keep all about Japan, so I will from time to time branch out into other areas like Vista.

In case you have lived in a cave or not been on the net lately, Microsoft is soon releasing (I say soon but who the hell really knows when they'll release it) a new operating system as the successor to Windows XP. Well, they recently released a Beta version to the public, that nearly crashed the internet, and I mean the entire internet.

Lucky for me, I got it before they removed it. At nearly 4GB, it was a monster file. Thank god for NTT B-Flets Fiber! I've just gotta have my fiber. At 100mbits bidirectional, it makes downloading monster files a breeze. I think I downloaded that 4GB file in 45 minutes-1 hour. I know a few people spent 15 hours or more on it. God bless them.

But I should have Vista up and running in a few minutes. I see the install screen going full bang now. It's taken nearly an hour to get it installed. I hope this works on my test machine.

Posted by Big Booger at 6:46 PM No comments:

I've recently changed to a new school (I teach at two on a 6 month rotation). I went to the new school on Monday and have been there for nearly a week. It was strange visiting the new school. My previous school wasn't that bad, it was old but clean and they were remodeling the building.

The new place looks like some shit hole third world bordello. The walls are peeling and cracked, the titles are grimey and funky, there are cobwebs all over the place, the school ground looks awful, and the teachers room is probably the worst.

There are only two buildings at the new school and they both are 4 stories with 2 crosswalks on each ends of the builds that connect the two buildings. There is a gym with a wooden floor that's all scuffed to hell, with not a single line showing full color... most of it has been scrapped or warn off from age.

The students look different too at this new school. They are slouchy and look like utter pisswads. There faces look gloomy and smug. But it's not just the students that look terrible, the teachers too look like they've been smacked in the face with a sack full of potatoes. They walk around all hunched over like that whack job from Notre Dame. It is very depressing to have to go from a school that was full on spirit to one that's ready for the graveyard.

The strangest thing about the school is the turf field in the school courtyard that lies between the two. It looks like a real grassy area, but as soon as you get within pissing distance to it, you can tell it's fake. This area, is the place where I gave my introduction to the students, along with some student teachers who would be there for the next few weeks.

The turf is a place for kids to wrestle around, hang out, and sit on during lunch. I have been offered the same opportunity but I think I will pass on it... something about sitting on plastic fibered turf in the middle of July when it hits 80-90 degrees (28-32C) just doesn't appeal to me.

The school's a real dive, but I think I'll like it well enough. If you're given a shit sandwich and your starving, I think you'll do one of two things, grin and bare it, or die. I am not the type to die, so we'll see how it goes. Besides I had been warned about this school long before I came by the teacher that taught there before me. We actually switched schools and I was filled in quite well about all the elements at play in that school. Had it not been for that, I would have been really fucked.
Posted by Big Booger at 7:05 PM No comments: