I and my wife met one of her friends in Tokushima for a chance to watch the Awa Odori, a special dance held during the bon season of Japan. Awaodori consists of a group of dancers clad in bright colored kimono, yukata, or happi, who dance to very spirited music in a way that would remind you of someone who is drunk or possessed by some demon. 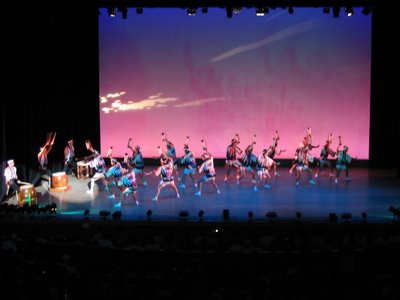 We took a train and bus from Akashi to Tokushima where we met my wife's friend. Then we took a taxi from Tokushima station to the concert hall to watch the Awa Odori performance. When we arrived there was a line of people that wrapped all the way around the side of the building and halfway down the street. And it was hotter than a witch's tit there. The taxi guy was kind enough to give us some uchiwa (fans) so we could cool down. 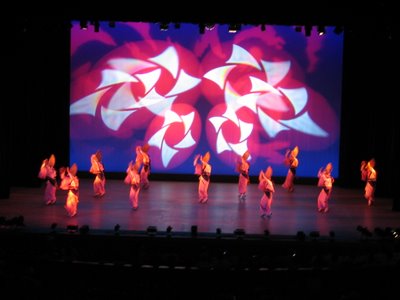 Once we entered the concert hall and the Awa Odori performance began I was totally at awe. I had seen many obon odori in my time here in Japan. But the Awa Odori is very different. The dance is different based on the group doing it and the footwork, body rhythm as well as the music are totally different compared to other dances. The feet move in a snake-like rhythm while the body slithers around. The hands are used in a twirling motion sometimes with uchiwa to help accent the movements.

Even children joined into the festivities. There were several performances by children not more than 5 or 6 years old. They danced in sync with the group and did a very entertaining job. It was very impressive to see several generations of people from the same village putting on the Awa Odori. My wife and her friend made several "How cute" comments during the dances.


What wikipedia says about the Awa Odori:

Awa Dance Festival (阿波踊り, Awa Odori?) is held every year in the time of Bon Odori (Bon festival) in the area of Tokushima city (徳島市; -shi), the capital city of Tokushima Prefecture on Shikoku island of Japan. It follows an accompaniment such as Shamisen, Drum, Brass, and Flute, and dancers dance and walk. Dancers wear regional costumes and often sing while dancing. Men and Women follow separate dance steps and wear different costumes, although most professional Awa Odori troupes will tightly choreograph the movements of their male and female members together.

If you get a chance to see the Awa Odori in Tokushima you will have seen something that Japan and Japanese have to be proud of. It's a cultural asset that should be preserved for generations to come. And it looks funky too!
Posted by Big Booger at 11:44 PM No comments:

This weekend my wife and I headed out to a small town in the southern part of Okayama. The village, Ushimado (牛窓町), is located on the southeastern part of Okayama Prefecture, about 40 minutes from Okayama city. Ushimado, which literally means "Cow Window". Though originally, the second part "Mado" came from marobi, (転), which means to fall down.

To see a map of the Ushimado area, click here.

The name derives from a legend. The legend states that the wife of Emperor Chuai went on an expedition to Korea, when suddenly a huge eight-headed cow came and tried to damage her ship in present day Ushimado. The cow was split by the bow of the ship and the different parts of the cow made the islands in the area. 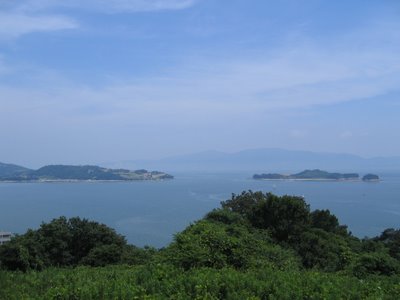 So we decided to head to Ushimado by car. We drove west on the Sanyo Expressway all the way to the Oku Interchange and then about 40 more minutes to the villa where we stayed. We checked in at the town office and received information as well as our key. From there we drove around the small town and then up the mountain to the Ushimado International Villa. 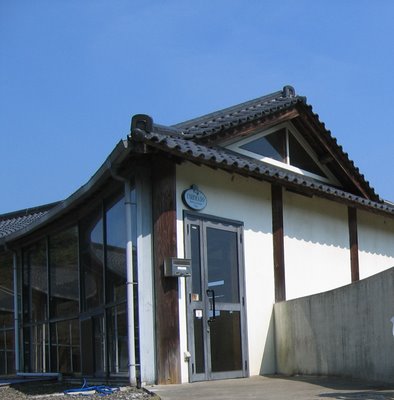 The villa was rustic and located on a very steep mountainside. Luckily for us no one had booked the place on Sunday so we had the entire villa all to ourselves. It was heavenly, peaceful and serene. As soon as we exited the car the fresh salt water hit our nostrils like taking body shots of tequila off of some Mexican stripper.

Nearby were several shops and stores including an excellent gelato shop. We visited the shop shortly after stowing our luggage in our room. We drove up to the shop, went inside, and were treated to a luscious frozen dessert called gelato.

Gelato is an Italian frozen dessert made from milk (or also soy milk) and sugar, combined with other flavourings. The gelato ingredients (after an optional pasteurization) are super-cooled while stirring to break up ice crystals as they form. Like high end ice cream, gelato generally has less than 35% air - resulting in a dense and extremely flavoursome product.

The Copio, Ushimado Gelato Factory, had several gelato flavors to choose from, including olive, watermelon, milk, cocoa, and peach among others. I was tempted to go for olive but instead I chose a double watermelon-peach combo. My wife went with the watermelon too. It was awesome.

In the evening we went down to the pier where there was a ferry service and did a little dock fishing. I and my wife fished for a few hours and we caught some interesting creatures. I nabbed a small crab, and my wife wheeled in a tiny octopus. It was the first time for either of us to catch these kinds of sea life. 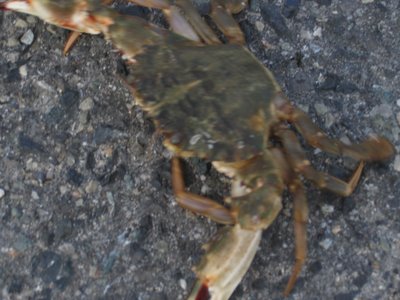 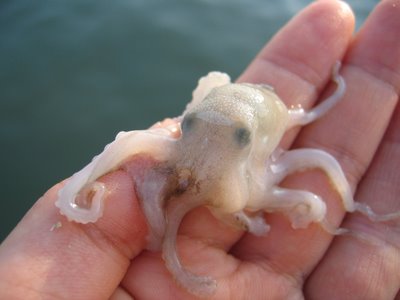 The next day we went to the Ushimado beach and swam for a few hours. During our time on the beach we decided to go "Kurage Hunting" or Jellyfish Hunting. We had seen several while swimming and had decided to remove them from the water because it's rather painful to be "venomized" by one. So we got some sticks and took out about 5 or 6 large jellyfish. It became like sport for us.

Later in the evening we went to a very nice yakiniku (barbecue) place in Ushimado and had a good time. The meat was the best we had had at any time since living in Japan. Even my wife complimented the great taste and quality of the beef we were served. It was mouthwatering. All the meat and vegetables were fresh and of good quality. And their kimchee was awesome too. 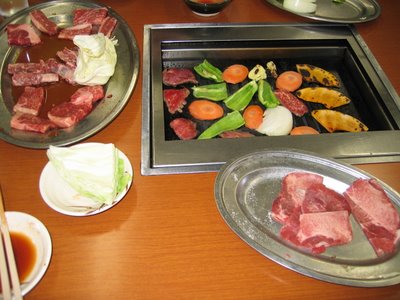 All in all our trip to Ushimado, staying at the Ushimado International Villa, and enjoying the sites and sounds of the area made for a very relaxing and entertaining trip.
Posted by Big Booger at 6:39 PM No comments: