Today a student whom I have discussed before and is known as Dopey-kun came slithering into the teacher's room during normal class hours. It was my planning period and so I sat there watching this scene unfold. They kyoto-sensei was sitting at his desk working on his computer when this san-nensei kid comes up behind him and starts spying on what he is doing. He got almost over his shoulder when the kyoto-sensei jerked around and faced the student.

The boy didn't even appear startled but continued to stare at whatever was on the computer screen. He then sat down next to the vice-principal and started trying to quiz him about his work. I guess this ticked off the vice-principal because he soon unleashed a tirade on this kid. He started asking him why he was in the teacher's room, why he wasn't studying with the rest of the students, why his hair was hanging over his face, and why his uniform was all disorganized. He wasn't acting mean about it, only a little aggressive. It looked as if he were trying to help the kid to realize what a crappy life that he will have in store for himself if he keeps on heading down the road that he is on.

I guess this ticked off the student enough so that he left the teacher's room. Well not to be ignored the vice-principal followed him out in the hallway and started giving him another earful. Soon however, the kyoto-sensei was joined by a 3rd year teacher and they somehow managed to get that kid back into the classroom. But I know for sure, the moment he returned, he would throw his head down on his desk and sleep because this kid is not interested in learning or anything like that. He is totally unreachable and that's partly why he earned the nickname "Dopey-kun."
Posted by Big Booger at 2:13 PM No comments:

A Burst of Energy

Lately I found that as we approach winter my tension level goes down the toilet. I start to slow down, get less excited and basically enter a tutelage hibernation. I loose focus and just don't give it my all. That's not to say I don't teach, or that I am taking time off. I just sort of reduce the entertainment factor of teaching. A skillful teacher combines education with entertainment to really captivate those flowering minds which I normally do, but with the cold comes the slow down. 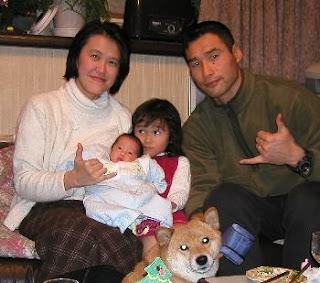 So it really startled the teachers that I teach with when I started giving it my all. I really laid down quite a show for students, a lot of yelling, cheering, much praise and so on. I even did a little skit or mini-play with the Japanese teacher to get the kids more interested in the content of the textbook we are using. (We are talking about a hearing dog named Mio and how she helps Ms Matsumoto in her daily life). Now I think the content is very important but the way it is presented is boring.

So I acted out the parts with the Japanese teacher and a volunteer student and really gave quite a performance. That set up the class to be more active and proved to work as I had planned it. I am still wondering where this burst of energy came from? Maybe from the sweet potato pie?
Posted by Big Booger at 11:24 AM No comments: